We are new to Ruckus (last summer) running ZD 9.6.2.0 build 13. We updated to that firmware version on the advice of support, who also told me to not go any higher than that one, that it's the most stable.

We are a school district, PC based, and have had no problems, until now. We're using WPA2, with no captive portal or web authentication.

The problem - we just purchased 90 iPad 2s, and they will not stay connected, even though the wireless icon shows that they are still connected. The dashboard also says they are connected. But after a minute or two, we can no longer access the app store, the Internet, etc. I've tried forgetting the network and reconnecting, resetting the network, and so far the only thing that works is to restart the iPad. Every couple of minutes. That is getting really old, needless to say.

So far, I've started up 13 of the 90, and this is happening on each and every one of them.

I've taken a couple of these home and connected to my home wireless with no problem and no disconnects. I have a personal iPad that has no problem anywhere else, but it does the same disconnect dance here on the Ruckus wireless.

We also have one user that brings in her personal Macbook, and it does the same thing. That's been going on for a couple of months, but since it is her personal laptop, and she's supplied a PC for work, it hasn't been a priority. Now, with all these iPads, it's a huge priority.

I have a support case going, but so far nothing is working. Does anyone out there have any ideas why this is happening? A fix?

If MacBook clients have similar problems, you may need to work with support to
determine if you have coverage or interference problems. You might tighten the
coverage to encourage iPads to roam sooner with bss-minrate 5.5 and a
smart-roam 3 on the WLAN, if they seem to report very weak signals.

LOL I'm pretty new to all this. The network was installed on the recommendation of the "partner" Ruckus suggested, so I thought the coverage was supposed to be decent. The apple engineer I spoke to suggested interference as the problem, but I was under the impression that the system was supposed to mitigate that by itself.

Being a newbie, what do you mean by tighten coverage? More APs? The MacBook in the equation is sitting in the same room with an AP about 10 feet away from it.

Whether it's true or not, I've read that iPads tend to hold on to an AP, even when they roam and should latch on to a nearer one - don't quite know how to encourage them to roam. What do you mean by "bss-minrate 5.5 and a smart-roam 3 on the WLAN"? (again, newbie here).

Can you make 2 additional SSIDs, one with WPA-TKIP and another without any auth/enc and see if the problem persists on those 2?

@Primoz - I just set up the SSIDs you suggested, hooked up an iPad to each one, and both lost the connection within a few minutes. Tested this several times with the same result.

I also watched the logs while this was going on. The iPad joins the WLAN, then there are no entries about disconnecting when the connection has been lost. There are also no entries if I tell the iPad to forget the connection and reconnect to the SSID. Putting the iPad in airplane mode brought up a disconnect entry in the log, as does restarting the iPad.

Any ideas?
Thanks again.

If you aren't seeing any disconnects makes me think L2 is ok and there might is a problem higher up.

Which iOS is on the iPad?
Which APs are installed?
You have an IP pool big enough so you aren't running out of IPs, right?

These are just some general things to try.

If all fails you might want to consider capturing packets per this post http://wlanstuff.postach.io/capturing... and send it to support. but ask them first if they require it.

I didn't know that I can go back on the FW. You can do that via the backup made during the upgrade process?

Another question - several APs are using the same channel, even ones that are in nearby proximity to one another. In particular, there are 11 out of 18 APs using channel 36 in 5GHz. In the 2.4 band, two adjacent APs are both using channel 11.

Isn't this system supposed to take care of this automatically?

The channels shouldn't be overlapping. If the system has been up for a short while this can happen, but it will sort it self out. If this is a system that has been up for a while and you haven't rebooted any APs there is something strange. This can cause hidden nodes which basically means degraded capacity and in severe cases can cause no traffic to pass through the network. IT would be consistent with the problems your having, but the network load should be higher for that and this would show up in a packet capture.

Well, I believe that I have ruled out the Ruckus wireless for the iPad issue.

Friday evening, I took a couple iPads to a different building in our district that is also using Ruckus, and found that there are no problems at that location. The networks aren't connected in any way, and each building has its own ZD.

Today, I hooked up an old Cisco standalone single band access point, set it up with a unique SSID so I could be sure that I was connected to it, then used that SSID on an iPad. The iPad had the same disconnect problem on the Cisco access point.

Onward to Watchguard and/or Apple to see if they have a solution for this. I've gone through a lot of the settings in the Watchguard firewall and nothing seemed to help.

@Primoz - about the channel overlapping... should I be using ChannelFly? Or should it be fixing that issue with background scanning? The support tech I spoke to was not very enthusiastic about ChannelFly. I still need to learn about this kind of stuff to see about optimizing the network

give the ipad static ip of that network you are using and than look?\.

@Nodar, this was quite a while ago, and if I recall, it was solved when Apple put out an update.   Apple support did not come out and say that though, they were quick to blame our wifi.  Lo and behold, their update fixed it.

If anyone is still experiencing this issue with older iPads (that still use 2.4ghz not 5ghz) what seems to have resolved the issue for me is changing the protection mode on the 2.4ghz radio settings from RTS/CTS to CTS Only 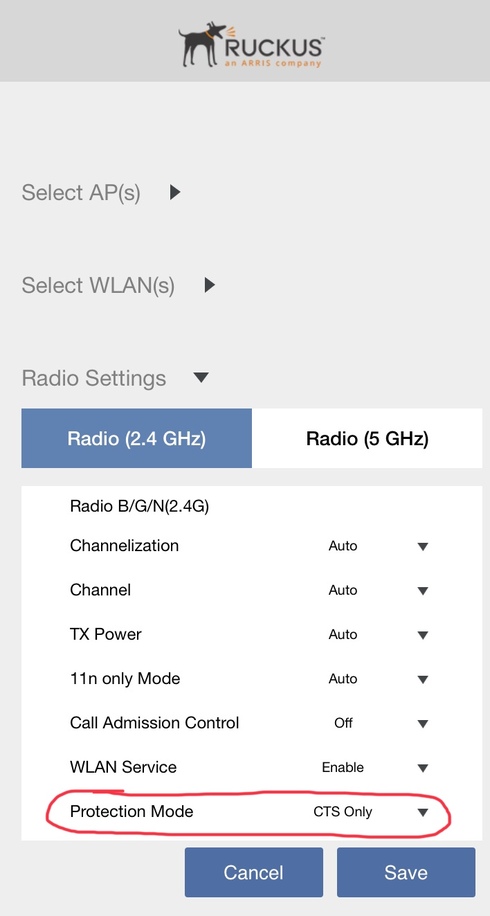