I came across this new line of access points from zyxel featuring a smart antenna array. After reading the white paper, it appears that it operates the same way beamflex does. Is this a joint venture between ruckus and zyxel, or is it just their own implementation?

Well it seems we've all come to our conclusion about this. Ruckus isn't the only smart antenna vendor in the wifi industry. Marking this thread as solved.

From description I see on Zyxel site (https://www.zyxel.com/uploads/tech-lib/WhitePaper_SmartAntennaTechnology.pdf) it seems to be nothing more than just empty marketing -- it uses standard 802.11ac beamforming (3 antennas for 3x3 AP), which means that it has no additional  value.

Idea is that  you can use all 3 antennas of 3x3 MIMO AP to transmit same data use with phase shift,  to make a bit directed diagram, but it makes only 1 spacial stream with a bit  improved reception (not more than 4 db anyway).

This is standard 802.11ac functionality, and may be supported by all 802.11ac  APs. Main problem is, that 3 simple omni-directional elements improvement can't provide any serious directional effect,  even if signal phases are coordinated perfectly.  This functionality is usually disabled, as it  provides very small improvement, if coordination is perfect, but will have heavy impact on performance in case coordination is wrong.

Ruckus Beamflex is different, as it uses separate array of antenna elements for each MIMO chain and antenna, so when you have 4x4 AP, you have both 4x spacial streams and  beamforming for each of them working in the same time.

Thanks for sharing the document. I can't find beam-forming in this white paper. Instead, it only mentioned switch beam, and from the antenna design, it is not dipole antenna. The antenna is surrounded by black object, but can't tell what it is. I googled zyxel smart antenna 11ax, then it shows the antenna has PCB around it, and looks like the purpose is to change antenna pattern.

APs with embedded antennas never use dipole antennas,  they all look similar to what you see there. Most important  is that to have smart antenna with additional beamforming (as Beamflex)  you need multiple  elements for each channel (so 3x element  kits for 3x3 AP), processor to manage them and signal switch for each element (for 3x3 AP it would be at least 9 antenna elements for each band, but probably more). Zyxel clearly has just 3 antennas in each band for 3x3 AP, so this is just standard 802.11ac beamforming feature.

700 patterns is even more meaningless marketing -- it just means that 700 different phase shifts between  channels are possible. It is meaningless number of cause, usable only in marketing, as this patterns are not different enough to be used all. What is not actually mentioned, but is a benefit,  that Zyxel at least located antennas in a way, that allows 802.11ac standard beamforming at least theoretically to be used (but even so -- don't expect to sense any real improvement from that) .

Anyway, it is not that important, Zyxel is good enough vendor if you look for cheap SOHO devices, and you can't expect it go in higher league. They just made marketing to look, as they had some new technology, instead of doing something new. In the same time, if AP is decently constructed, it may be way better than usual cheapo noname AP, just because of better overall design. 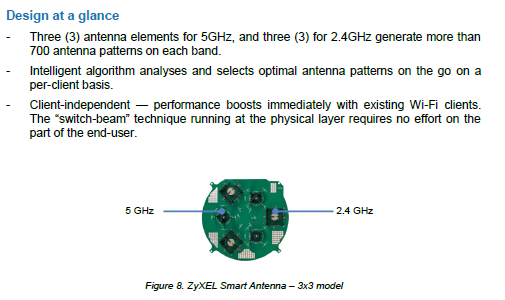 The white paper document states it is client independent. Correct me if I'm wrong but isn't beamforming dependent on whether the client supports it, at least in the 802.11ac standard?

Agree with you, s61. Beamforming is client dependent.

I intended to say "omni directional" antenna, but that's fine. Just trying to find what's the truth. Is it physically changing antenna pattern, or is it Tx beamforming.

The typical embeded antenna is like this. They are mostly PIFA antennas. You can easily find those in FCC report. 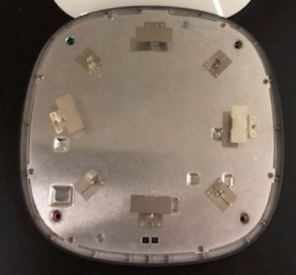 My point is, from the white paper, and from the antenna design, there is no way to come out the conclusion to say it is just beamforming, pure marketing, but nothing else.

2. I became really curious (you are right, from whitepaper conclusion can't be done, as WP is not written by technical people for technical people). So I looked on fcc report, which is really technical source: https://fcc.report/FCC-ID/I88WAC6503D-S/2472776 and description there is quit different. I found that this AP really seems to be similar to clone of Ruckus ZF2942, each antenna has (at least it looks so) 4switchable elements, and there is FPGA to switch them.  In this case this AP can provide real beamforming. It is interesting, how it corresponds  with Ruckus patents, but it is possible, that patent for this old design without  PDR is expired, or even sold, or there is a way to ignore it. I don't expect Ruckus commenting on that, but it would be interesting to know. There is another china vendor, which is openly copying Ruckus Beamflex, difference is that his equipment doesn't really work that well...

Did a little bit more digging as well. Picture below comes from their WAX650S. Googled the company, adant, and it turns out they specialize in designing smart antennas. They've contracted zyxel and d-link according to the following article. https://wifinowglobal.com/news-and-blog/adant-smart-antennas-can-boost-wi-fi-speeds-from-close-to-zero-to-tens-of-mbps/ 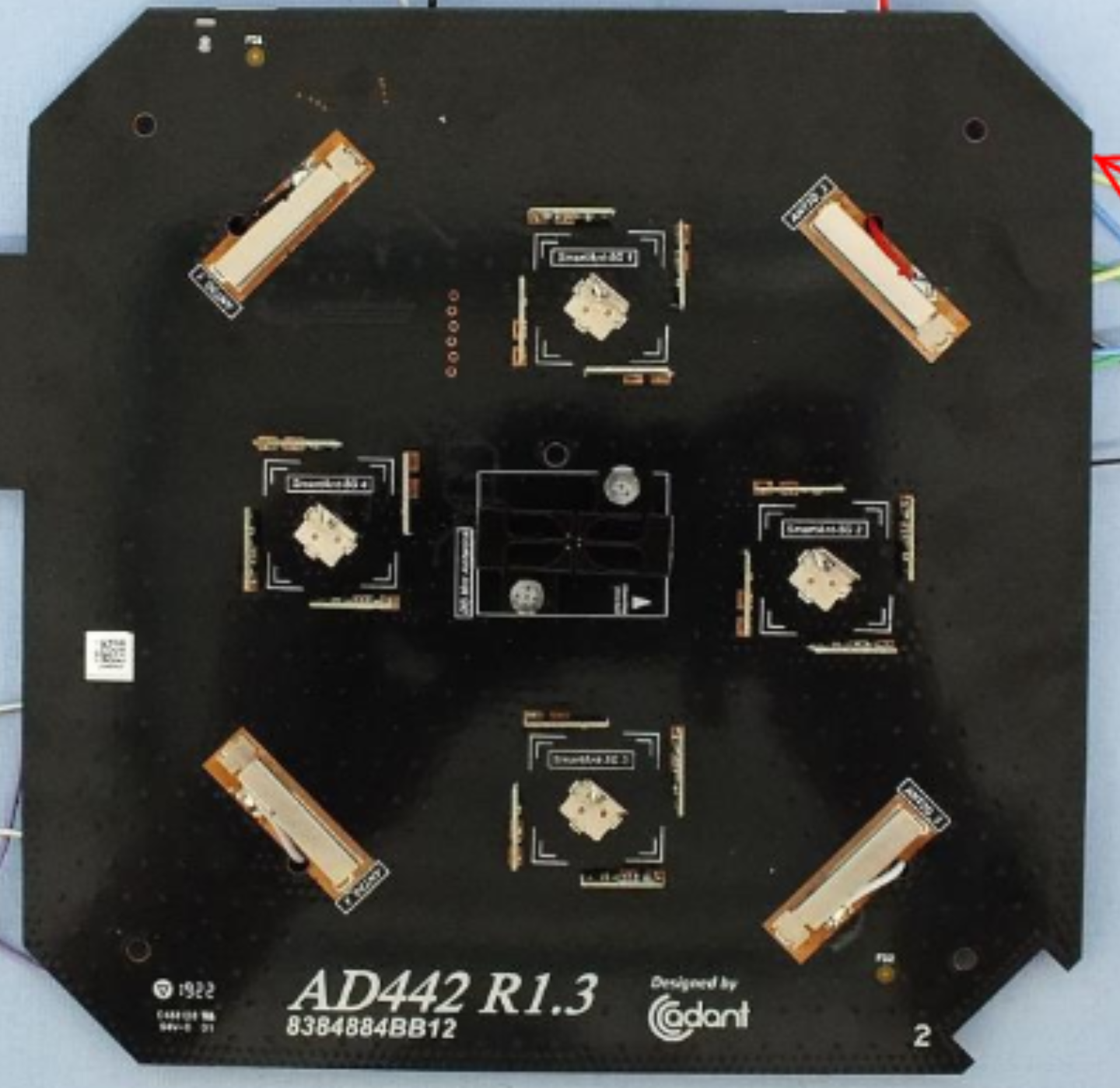