I use vSN-e under VMWARE 6.5 with a Hotspot (WISPr) Portal. Portal and authorisation on a external LDAP-Server works perfect. Also the "User Role Mapping" according the defined LDAP-GroupAttributeValue works well. But now I would like to give each USER according to "Access VLAN ID" in "the User Role-Definition" an pre-defined VLAN. This does not work. When I define a VLAN by UserRoleMapping, the AP (R500) does not put the client on that VLAN, but instead uses the VLAN with is defined in the main-WLAN-definition. Surprisingly, if I change the WLAN-Definition to VLAN-Pooling, it lets the AP uses a VLAN (an I configured my gateway so this works!), but the "userRoleMapping" does not change the VLAN?So is it possible, to let the VLAN be defined by a policy on an Hotspot-Portal?

I believe I found the answer myself. On Page 260 on the Admin-manual, it says, that a PolicyAssignment (proxy) for "dynamic VLAN" is for Hotspot not available :-( 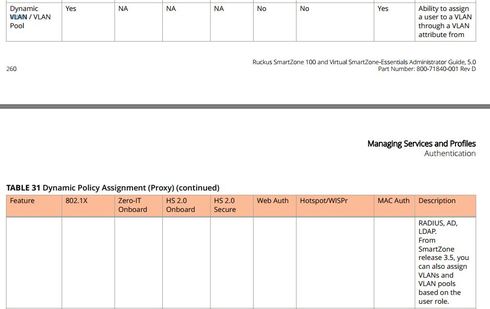