I don't know what message you mean, but suggest a factory default and try again?

re-download the firmware file.. may be its corrupt..

Sometimes the msg is shown on AP.

I am using the WEB-UI logged in using default ip address of 192.168.0.1, username=super and password=sp-admin

I encountered this problem while doing a downgrade from 101 to 100. My goal is to perform a step-by-step downgrade to 9.8 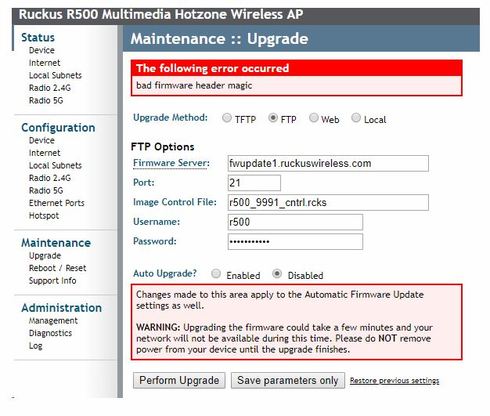 I get the same error. I think they have changed their chipset, so for those that cant upgrade because we lose functionality of our older AP's are SOL

Can you please paste the output of below commands from AP :

We have a bug raised with our engineering team that new R500 with new chipset are not supported on old firmware version.

Could you please upgrade the controller firmware to 9.10.x firmware.

seems like Ruckus isn't that reliable in the area of update as compared to before... :[

OH this isnt good.  Do you have a link to the article.  We cant upgrade beyond 8.8.2.0 build 15 because we will lose functionality with our older AP's, and if this is the case, this is very, very bad!

sorry, there was no fix to this other than to upgrade the current ZD. in your scenario, i think you might have to decide between setting up 2x on an unleashed with the rest on the old firmware... or set the 2x old ones as independent AP, and upgrade everything else.

So, what you are saying is that Ruckus updated their chipset (maybe not just specific to the R500's), and didnt test backwards compatibility?  whats this "setting up 2x unleashed". sorry but i have not idea what that means, got a link to explain it a bit further?

@Joke Jong, extract that compressed folder the you will find a lot of .bin files for different access points the pick the .bin file of your AP and upload it, that is how i managed it

I think you meant BL7 files and not bin files. We uploaded the BL7 file and not the ZIP or any other file formats.

We have two ZD 3050's that are on 9.8.2.0 build 15.  we cant upgrade the firmware, because we have older AP's and will lose them (maybe 30 of them), but below is what i emailed into a ticked i opened with ruckus (ive had no reply in THREE days from them, im in a back hole i suppose), anyway, have a read and give your thoughts (Sorry its a long one):

We bought two R500 Access Points about a year ago, and those are our spares.

Within the last three to four months we bought four new R500 AP’s for a new building that will be coming on line soon.

When I upload any firmware version, whether its version 100 (which you had me try) or version 9.8.1.0.101 (the latter being and older version to what we are running), after it does the update which is states is successful, and returns to the main login AP screen, it still shows it version as 104.0.0.1347.  Meaning NONE of the firmware updates actually “takes”, and ive tried EVERY version of firmware below 104.

Well, it WORKED, it took that version without issue, and when I plugged that AP into our live network, it updated to 9.8.2.0.15 and joined the ZD without issue.

This leads me to believe that the newer R500’s that we bought, have some fundamental hardware difference, that isn’t allowing the update/downgrade to ANY firmware version (it seems “stuck” on version 104.0.0.1347 .  I have tried the upgrade/downgrade on THREE of the four newer ones, and so far ALL THREE wont upgrade/downgrade.  They all go through the process, state it was successful, but when I log into them, they still show the 104 version of the firmware, and NOT the one I just uploaded.UPDATE: i got one of the four (newer ones) to get to version 100.1.0.0.432 but i cant get it any further down, i get that "bad firmware header magic" error!if this is because of a newer chipset, this is a HUGE issue and needs to be addressed by Ruckus.  Ive got a building coming on line, and NEED those new R500's on the ZD....

This is valuable feedback and if you have a ticket open, share these downgrade problems.
I think it's more firmware however, than hw/chip set issue, and version 104.x Solo AP image
came out much later and would have been close to ZD 10.0 compatibility.

You say above you couldn't downgrade some APs, but try the FD a couple times... I also
advise direct connect between AP/PC if you have a power adapter, or just your PC/AP on
a little PoE switch.

If you are successful, try to load the 9.8.2 code a 2nd time.  There are 2 banks of memory
in APs, that hold config/firmware data, and you want to permanently erase any 104 remains.
I hope this is helpful.

Its confirm that the latter batches of r500 has a chipset/memory configuration settings that are unable to support older ZD firmware.

so, what now? i just chip back this new batch, and thats that! i cant buy anymore as they will likely have the same chipset, and we wont be able to do anything about it (we cant just lose all of the older AP's we have, school literally just started).

To Mr Michael Brado:  to follow up with you.  these AP's (newer ones) have 104 on them, and when i try to downgrade to 9.8.2.0.15 solo (stand alone right?), i get that "bad firmware header magic" error message.  of the four newer AP's, only one of them i was able to downgrade to 100.1 and that was after about a dozen attempts, and now it wont go to any other version of firmware, newer or older, just gives that same error as above.

Well, after being told that the new post i did was a duplicate (which is wasnt, this is about the T model, mine about R) i was contacted by Ruckus support, and am getting all four of those affected R500s RMA'd with replacements.  So anyone else havign the same issue, here is what I was emailed, and hope it helps you too:

Some of the serial numbers begin with (for R500 only):

Hope the above Helps, just quote this, and get them RMA'd.

Hold on, where did my original Post go about the R500 and the firmware issue, I cant find it anywhere.  It was a new post, and not a continuation of this one..........?

It had exactly what you posted here above, and I removed it as Duplicate.

thanks, but nope it wast, it had the title changed to reflect the R500 AP's plus a lot more detail, this one is about the T model.  I'm not trying to make your life difficult as you are the "official rep" here in the forums, but not the customer support people who left me hanging for three days to try figure it out myself.  But i'm sure you had input into getting them moving, as it wasn't long after both my posts that all of a sudden, i'm getting contacted, so I thank you for that. .