Just received used R710 from ebay auction.  Plugged in to 12v power, factory reset, tried the phone app to try Typical Install, get the "Great you are connected to Unleased factory WiFi...." but when I hit start I get Unleashed  Unable to fetch default configuration from the AP.  So I try connecting via wire to 192.168.0.1, nothing, not SSH not HTTP or HTTPS.  Nmap reveals:

So, is there anyway to fix this?  Can I put Standalone or fresh version of Unleashed on it using the USB port?  Can you upgrade the firmware using the USB?

Thanks in advance for your help,

Hi John,I think we have already discussed this issue on another thread.https://forums.ruckuswireless.com/ruckuswireless/topics/r710-cant-connect-to-web-gui-or-sshRegards,Syamantak Omer

Sorry John, like so many before you, you've been sold an unsupported AP, and likely something that was bricked and damaged. I would submit to get your money back.Also, on your NMAP, try using the -A switch. you'll likely find nothing 'listening' on those ports.

I had the same issue. Solved by flashing a new firmware via tftp and connecting the onboard spi-pins.

@jside Could you share some info about the pinout and connection settings?

I used a  cable similar to this one: https://lawicel-shop.se/elektronik/kommunikation/rs232/usb-to-ttl-33v-serial-cable-for-rpi/

But basically any 3.3V serial to usb cable would work.

Pinout something similar to: 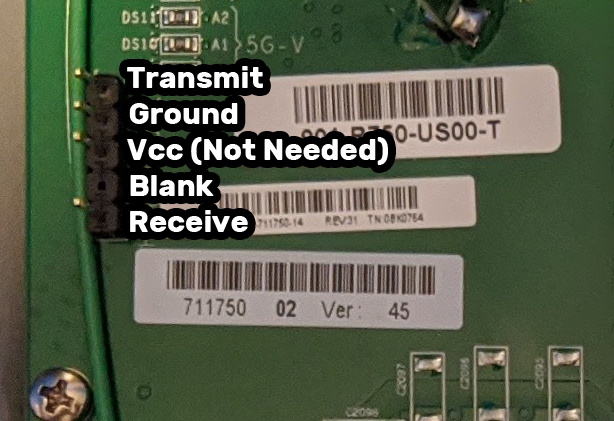 (Not my picture, borrowed on internet)

Login with super and sp-admin as password in the console

You need to setup a tftp server. I used my laptop with the same ip range as the AccessPoint, and had a tftp server running locally on it.

Then you can flash by:

image file name is the firmware you want to flash onto the ap, which should be located on your tftp.

@jside Thanks very much, I will give this a shot tomorrow.